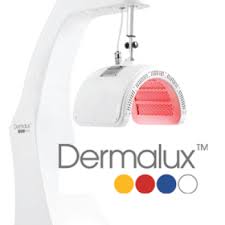 We have had such fabulous results from our LED treatments that we have invested in the ultimate LED skincare machine. Dermalux!

LED Phototherapy is based on the principle that living cells are able to absorb and are influenced by light and the treatment has long been recognised for its regenerating and anti-inflammatory properties.

While we often associate light exposure with skin ageing and damage, light also has many positive influences on the body. It helps us produce vitamin D and provides energy and serotonin and can also accelerate our skin’s natural repair processes.

The differences between the positive and negative effects of light are the amount and the parts of the light spectrum we are exposed to. On-going exposure to UV is very damaging but controlled levels of Red, Blue and Near Infrared light are clinically proven to be beneficial.

The treatment involves exposing the skin to low levels of this beneficial light energy from the visible and infrared part of the light spectrum which energise cellular functions to stimulate various cellular processes with therapeutic effects. Skin cells that are energised function better and regenerate faster which in turn leads to younger, healthy and radiant skin.

The effects of LED Phototherapy are a natural response similar to that of plant photo-synthesis through a process known as photobiomodulation.

Achieving results with LED Phototherapy is dependent of a number of key parameters to maximise the light / chromophore interaction that allow photobiomodulation to take place.

The key parameter is the precise wavelength or nanometre (nm) which determines the target for the light and also the depth of penetration into the skin. The second important parameter is the output power or photon intensity.

Each individual wavelength has a specific target chromophore within the skin (such as melanin, haemoglobin, water, cytochrome c oxidase, porphyrins etc.). Shorter wavelengths have more superficial targets and longer wavelengths penetrate to targets at deeper levels in the skin. If the wavelength does not match the target chromophore then there will be no absorption and no reaction and therefore no result. Furthermore if the photon intensity is too low and insufficient energy is applied to reach the target cells, again there will be no result as the minimum threshold has not been met. Not all LED Phototherapy systems are the same!

Get our latest news